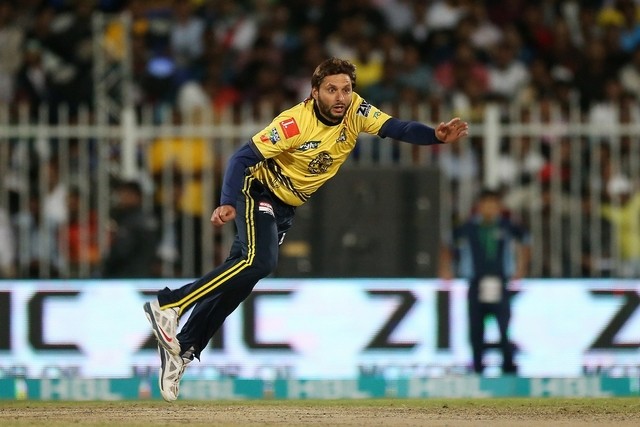 Shahid Afridi picked up career-best T20 figures of 5 for 7, setting up a comprehensive eight-wicket win for Peshawar Zalmi against Quetta Gladiators in Sharjah.

Afridi, who will be retiring from international cricket following the World T20 in India next month, struck off just his second ball, accounting for Akbar-ur-Rehman in the sixth over. Quetta, who were at a promising 40 for 0 at one stage, soon began to slide, as Afridi struck at regular intervals to carve through the team’s middle and lower order. He trapped Mohammad Nawaz lbw and bowled the captain Sarfraz Ahmed in the 10th over, before proceeding to remove both Mohammad Nabi and Elton Chigumbura in the 12th.

When the dust cleared, Afridi was left boasting figures of 4-1-7-5, and Quetta were tottering at 66 for 9, starting at the prospect of being bowled out inside 13 overs. However, Grant Elliott, on the back of two consecutive Man-of-the-Match performances, led a late rally, slamming a 29-ball 40 and adding 63 for the final wicket with Zulfiqar Babar. Their efforts lifted the team to 129.

Peshawar, though, had no troubles chasing down the small total. Their openers Mohammad Hafeez and Dawid Malan began brightly, putting up 60 runs off just 50 balls. Hafeez eventually fell for 36, but Malan carried on, adding a further 54 with Kamran Akmal. Malan went on to stroke his 12th half-century in T20 cricket, his 52-ball 60 taking the team home with eight balls to spare.

Barcelona At Top Of Table

Lahore Qalandar got must needed win against Peshawar Zalmi