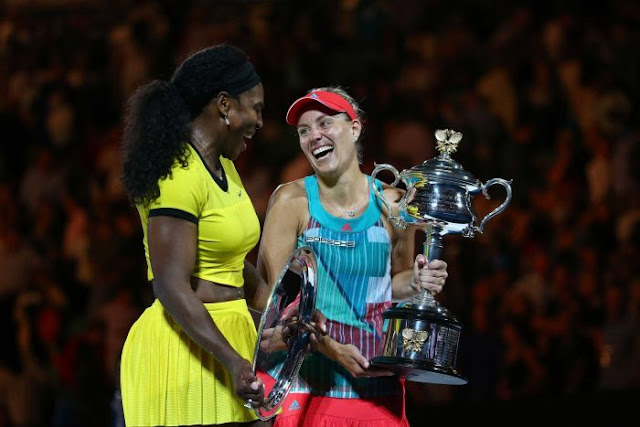 Both player played very well in the final and it was never a one-sided match. First set was won by Angelique Kerber when she found not much resistance from world no.1 Serena Williams. In second set Serena Williams looked settled down and was playing good shots. With winning second set, she showed her opponent that it would not an easy win for her. But Williams could not sustain his winning momentum in third and last set of Australian Open. After losing third set to Kerber, Williams enabled her to lift her first ever Grand Slam title.

In first set Kerber took an early break of serve to lead Williams, then sustain it to go to 3-1. The top seed would win first set, but it was Kerber who would break a second time and Williams was unable to make up for that and lost first set.

Williams looked good in second set when she broke the service and get lead to 4-1. Then the world had seen a great contest of second set between finalists of Australian Open that finished with score 6-3 in favor of Williams.

Third and final set of the match was the longest set of the match. Power shots of Kerber were out of reach of her opponent. Final result was 6-3 and Kerber was the winner of Australian Open 2016.
William was unable to equal the record of Steffi Graf of winning 22 Grand Slams.

“My whole life I’ve worked really hard and now I’m here and I can say I’m a Grand Slam champion and it sounds really crazy and unbelievable. It’s been the best two weeks of my life, of my career,” Kerber said.

“She played so well today and had an attitude a lot of people can learn from – to stay positive and never give up. If I couldn’t win, I’m happy she did,” Williams said.