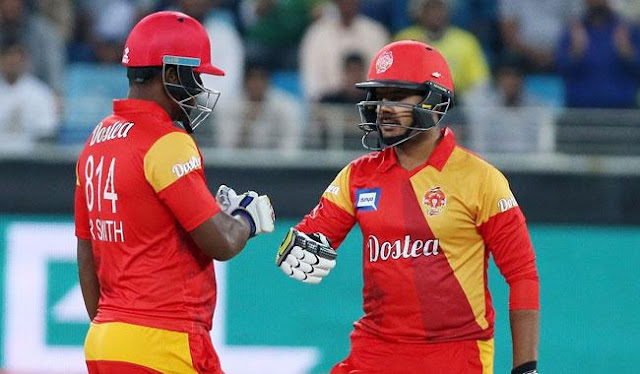 Sharjeel Khan scored the first hundred of the Pakistan Super League as Islamabad United galloped into the final with a comprehensive 50-run win against Peshawar Zalmi. Sharjeel’s 50-ball hundred powered Islamabad to 176 for 3 before left-arm spinner Imran Khalid’s four-for made sure Peshawar were bowled out for 126 with two overs to spare.

Put in to bat, Islamabad put together a 108-run opening stand in 13.1 overs, a majority of the runs coming off Sharjeel’s blade. Dwayne Smith, the other opener, struggled to get bat on ball during his stay of 37 balls to score 19 runs without a single boundary.

In the ninth over, Sharjeel unleashed two sixes and a four against left-arm spinner Mohammad Asghar. He followed that up with an attack on Shahid Afridi too in the next over to bring up his fifty. The most eventful over, though, was the 14th in which Shaun Tait dismissed Smith and Brad Haddin off consecutive deliveries, but Kamran Akmal dropped Khalid Latif to deprive Tait of a hat-trick. Sharjeel then struck the next two balls of the over for a four and six.

He brought up his hundred, studded with 12 fours and eight sixes, in style with a straight six in the 16th over and helped Islamabad score 46 in the last five overs. He was run-out for 117 in the last over of the innings.

Peshawar started slow in the Powerplay and were dented when Samuel Badree dismissed Dawid Malan in the fourth over. Kamran kept the score ticking till the 11th over before Khalid struck. Peshawar’s main source of resistance was opener Kamran Akmal, who made 45 from 32 balls. But with the next four batsmen scored only in single digits, the writing was on the wall.

Khalid removed Mohammad Hafeez and Kamran in consecutive overs, and Brad Hodge and Darren Sammy in the same over – the 13th – to reduce Peshawar to 80 for 5. By then, the required run rate had shot up over 13 per over.

Afridi provided his team with a few late strikes, but it was not enough. Khalid finished with 4 for 20 from his three overs and Andre Russell took three lower-order wickets, including Afridi’s, to end with 3 for 37.