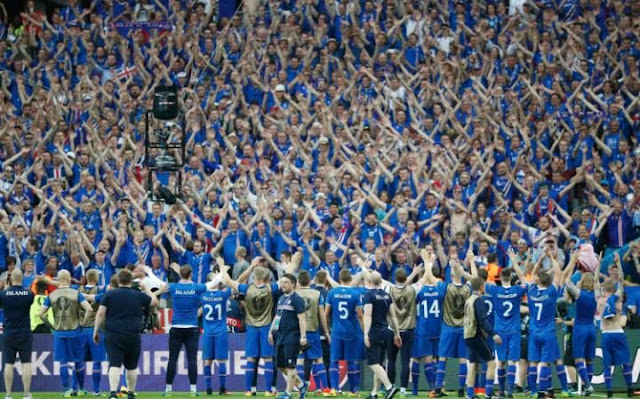 4 hours of night in summers of Iceland, won’t be enough to enjoy the winning party against England at EURO 2016

The small island nation stunned England with a 2-1 win at EURO 2016 and advanced to the quarterfinals. EURO 2016 is their first-ever at a major tournament.
Having already surprised many by getting out of the group stage, story of Iceland will continue as they will face host nation France next Sunday.

Despite their small population, Iceland’s supporters section in Nice was packed and they celebrating the win in brilliant fashion with their team.

Icelandic defender Kari Arnason rightfully called this result the biggest victory in history of Iceland.  Praising the team he said,

“We kept our composure and defended well. We all believed, the rest of the world didn’t but we did. I am overcome with joy. The gaffer had never lost to England, he told us and we had to keep it up. When Jamie Vardy came on he had the pace but we kept it under control.
This is without a doubt the biggest result in Icelandic football history. We’ve shocked the world.”


This summer will be remembered in history of football and Iceland in great words. A nation of about 320,000, which was ranked 133rd in the world just four years ago, has truly stunned the world. Now, they are looking to keep the party going with another win by knocking off a world power on their home ground in next round.