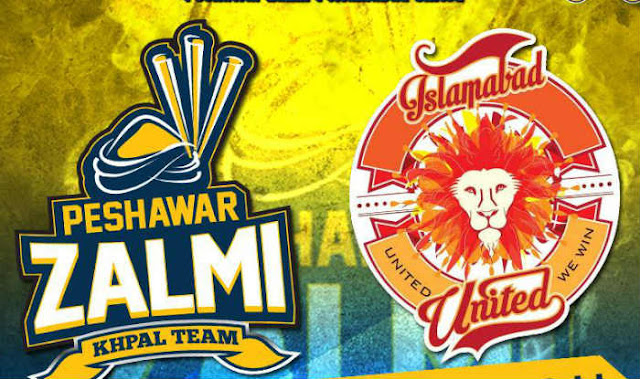 Jordan to Billings, FOUR and match is your’s United.

SIX from Watson to Junaid Khan on a full-toss

Smith hits a FOUR to Hassan on deep extra cover..

Sammy to Smith, Four on leg side. Sammy chased Smith as he tried to get some room to hit on off, but flicked the ball to leg side for a four.

Jordan to Watson, Yorker outside off, great area to ball in depth overs.

Jordan to Haddin, OUT !! Caught by Akmal behind the stumps..
Haddin c K Akmal b Jordan 73(39)
Ball was a bit slower, Haddin wanted to play his favorite shot, inside-out but could not get it done.

100 Partnership with a SIX from Haddin. Good effort from Haris this time but not enough to stop it.

Junaid Khan to Haddin, Flat shot to deep extra cover, straight into the hands of Haris Sohail but it is dropped and it is FOUR.

50 for Brad Haddin and 100 for Islamabad United.

Hassan Ali to Haddin, Flat SIX. Ball is a bit short but not short enough to stop Haddin from banging it out of the ground.

Momentum of Islamabad is effected because of rain and body language is not good to get 190.

Players are out and play has started.

Well well, the rain is started.. THERE WAS ONLY 3% CHANCE OF RAIN :-O

Required run rate is over 10.. United have to do something about this rate or otherwise this is going to climb up so high..
Sammmy To Smith, Six. A much needed SIX from Smith. This was huge 77 meters..

First over of Junaid Khan costs 14 scores to Peshawar Zalmi. Islamabad is looking good with two power hitters up front.
Peshawar Zalmi’s innings has ended and they have a really good total on the board. Pitch is helping both bowlers and batsmen. Ball is seeming and a bit slow but can be handled to chase this score..
Stay tuned..  We will br right back

Watson to Sohail, THAT’S OUT!! Caught!!

Afridi, out Caught by Misbah
Afridi c Misbah b Watson 4(4)

150 is up for Peshawar Zalmi

Akmal with a huge SIX to Ajmal.. Rameez Raja is calling it SIX AND HALF.. 🙂

Kamran Akmal has to be there at crease if his team is looking for a big target. 9.6 is current run rate which can lead them to 195 runs.

United have got what they were looking for.. some quick wickets to restrain Peshawar as low as possible.

Misbah brings back his experienced bowler Watson, looking for a break through..

Kamran Akmal has scored first 50 of PSL season 2.. Can he convert this fifty into a century??

Shane Watson has the ball now, Misbah is keen to stop runs to get Peshawar under pressure..

Irfan to Akmal, huge SIX ..That is the first SIX of the PSL. Many more to come

2 Fours has given Peshawar a power start what they are looking for.. Lets see how far it goes..

Sami has the ball to start second over..

First over is completed. That is fantastic start from Irfan and United getting an early wicket keep Peshawar under pressure.

Pitch has some live green and brown grass on it but nicely rolled..
temperature is nice and comfortable, not chance of rain, so perfect conditions for cricket.