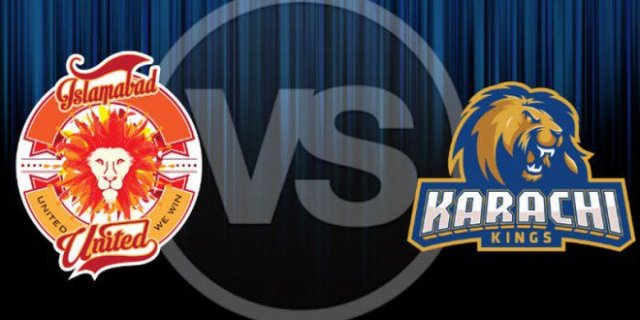 Karachi Kings got their first win of PSL 2017 against Islamabad United after playing four matches in 2nd edition.
It was the long awaited victory for Karachi Kings, the most expensive team of PSL 2017, as they lost their last 7 matches in PSL.

It was match no 10 of 2nd edition of PSL played in Sharjah. Match was reduced to 13 overs due to rain. 9th match of PSL was also abandoned due to rain in Sharjah between Peshawar Zalmi and Quetta Gladiators.

Karachi Kings won the toss and decided to bowl first. They bowled with great control to restrict Islamabad United to 90 runs in 13 overs.
Dwayne Smith (29) and Shane Watson (26)  were top scorers from Islamabad United. Imad Wasim and Usama Mir got two wickets each.

From Karachi Kings, Babar Azam played a handy innings of 47 runs lead to victory, although it came from D/L method.

Babar Azam was man of the match for his innings of 47 runs.