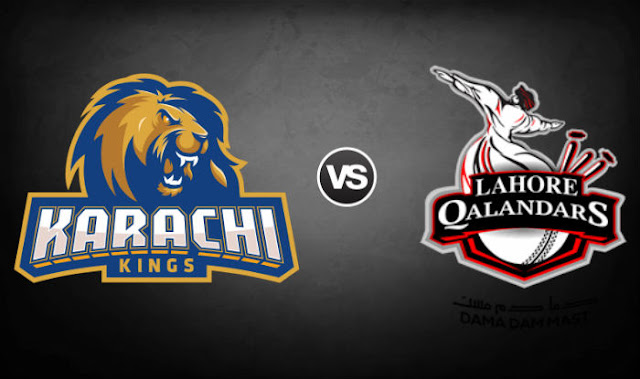 Irfan to Sohail Khan, Bowled, OUT!!

Irfan is bowling very good last over.. going for yorkers..

Tanvir to Amir, SIX. a straight one..

Tanvir to Bopara, OUT!! caught by Bilawal Bhatti.. he scored 5 runs on 9 balls.

Bilawal to Imad, FOUR to long on. Hammered..

Narine to Pollard, BOWLED OUT!! Narine makes Pollard leave the crease before any damage is done by him.   Pollard b Narine 8(6)

Narine is back to bowl his last over.

Bilawal Bhatti to Pollard, FOUR, Pollard is taking not much time to get on with the momentum left by Shiob Malik and Sangakkara.

Both batsmen are new on the crease. They needs some time to set which is not good for Kings.

Fire works literally started from the bat of Sangakkara and just stopped when he bowled by Tanvir. Sangakkara b Tanvir 65(45)

Bilawal to Sangakkara, another FOUR to deep mid wicket. Sangakkara is really going after and targeting Bilawal Bhatti.

Required run rate is almost 11. Karachi have to do something about it or otherwise it is going to be a huge pressure on them.

Sunil Narine is back looking for another wicket.

16 runs in 6th over of Lahore from Irfan. This was much needed for Karachi Kings.

Singles and doubles are not going to help that much, Karachi needs some fire works here. Sixes and Fours of course.

We are back with the chase.. big guns of Karachi have to perform in this match to win.

So Target is set for Karachi Kings. Karachi needs 180 runs in 20 overs to win this match. This would not be a difficult chase IF some of key players of Karachi perform tonight.

Amir to Tanvir, out Mohammad Irfan Jnr Run Out.

Amir to Narine, Caught by Bopara, OUT.

Amir to Elliot, Caught OUT, caught by Sngakara. Elliott c Sangakkara b Amir 17(18)

Usman Khan is back

Sohail Khan to Narine, SIX to long on.

Sohail Khan is back to bowl 18th over. Bowling great slow balls to restrict Lahore to a low total.

Great over at this stage of match by Usman Khan, only two runs in the over.

Usman Khan is back with the ball and stated well with three dot balls to Elliot.

12 runs of Amir’s over which is good for Lahore to get a big total close to 200.

Lahore Qalandars are going on a good pace but they are lacking in hard hitters in the tail of batting line. Karachi Kings are looking for a wicket to drop the run rate to restrict them to a low total.

Current run rate of Lahore Qalandars is 9.35 and with the same run rate they can get 186.

Sohail Khan is brought back to get a wicket..

Chris Gayle is hoping to get a hundred tonight in this match and very determined to get his 19th century on T20.

Imad Wasim is introduced with the ball. He is an experienced bowler in this format.

Usama to Fakhar, OUT caught by Usman Khan Shinwari making up for his previous mistake. This is a good running catch. Fakhar Zaman c Usman Khan b Usama Mir 56(36)

Usama to Fakhar, SIX to long on.. good use of feet..

Fifty is up for Fakhar Zaman.. A fantastic and much needed knock for ahore Qalandars..

Usama Mir to Umar Akmal, SIX to long on..

Ravi to Umar Akmal, slow ball picked up by Umar and Dropped.. another drop catch..

Ravi Bopara is being introduced with the ball..

Usama to Fakhar Zaman, top edge gone high in the air, DROPPED.. Fakhar in dropped by Sngakara on 39.

Usama to Umar Akmal.. FOUR to long off..

Wide.. whole over is being ruined by wides..

Usman Khan Shinwari is back with ball..

Usama Mir is on with the ball and very good so far.. 1 run in 5 balls.. he is tall, he lets the ball fly in the air and gets bounce.

14 runs from Usman Khan’s over.

13 runs from Sohail Khan’s over.