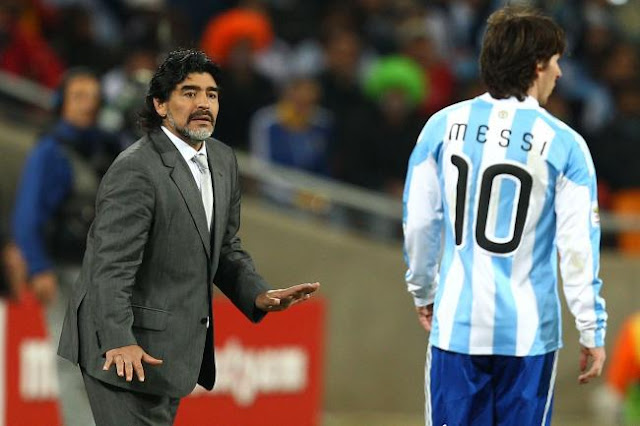 The Barcelona superstar left the field in tears after missing a penalty in the Copa America Centenario final shoot-out against Chile on Sunday.
After defeat, he promptly announced his retirement from international football.

The 29-year-old Argentine national Messi, is a multiple trophy winner with Barcelona, has now been part of four final defeats with the national team. Three of them in the Copa America and one at the 2014 World Cup in Brazil against Germany.

“Messi must carry on in the national team… because he still has a lot to give, because he’ll get to (2018 World Cup hosts) Russia with chances of being world champion,” Maradona was talking to a local newspaper on Monday.
“He has to lean more on the lads who can help him take the team forward and less on those who say he should leave,” added Maradona, who played in two World Cup finals.
“Messi was abandoned and I don’t want to abandon him. That’s why I want to talk to him, to fight against all those who abandoned him,” said Maradona, who coached Messi and Argentina at the 2010 World Cup in South Africa.

And the President tweeted: “More than ever I feel great pride for our team. I hope we can continue to have the joy of seeing the world’s best player for many years.”

After Sunday’s final, Messi was frustrated with his and national team’s performances and announced his retirement from international events.

“I’ve done all I can, I’ve been in four finals and it hurts not to be a champion,” Messi said. “It’s a hard moment for me and the team, and it’s difficult to say, but it’s over with the Argentina team.”