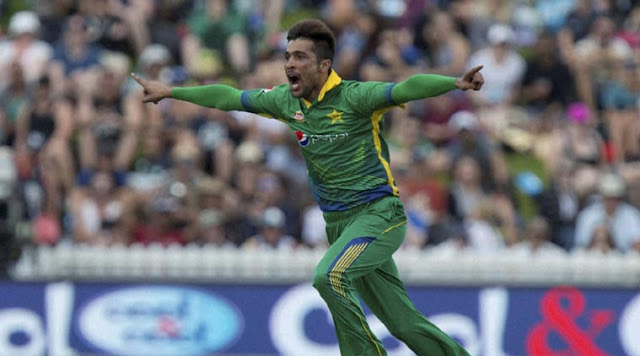 Pakistan captain Shahid Afridi hailed fast bowler Mohammad Amir as “the best”, adding his name is already among the top international pacers.
A few days back, India opener Rohit Sharma said there was nothing to “go gaga” over Amir.
But since his return to international cricket after serving a five year ban for spot fixing, the left-arm seamer has wrecked havoc for several batting line-ups, earning a hat-trick in the Pakistan Super League (PSL).
“Now if he (Rohit) has said something like that, you have to ask him. For me, Mohammad Amir is the best. The way he has been performing, like how he has performed in the past, his name is there among the top international bowlers,” Afridi told reporters here on Sunday.
Pakistan have never won a game against India in World Cups, be it in the 50-over format or Twenty20.
Speaking on the same Eden Gardens, the all-rounder said: “This (Pakistani record vis-a-vis India) is negative. However, negatives comes with positives. India are playing very good cricket at the moment. The last game against us in the Asia Cup, we had it in the first few overs but then there were some great performances from Virat Kohli and Yuvraj Singh.”
The 36-year-old believes the start of the tournament is very important and would therefore take one game at a time.
Pakistan begin their campaign on March 16 at the Eden Gardens against a qualifying team, which in most probability could be Bangladesh.
Pakistan then take on arch-rivals India in a high-voltage clash at the same venue on March 19.
“Obviously the first game is very important, playing against Bangladesh. Then another against India. Both very crucial games for us. We have to get into the groove from the first game itself. The pitch here suits us and for us both matches are very important,” said Afridi.
Pakistan were earlier scheduled to arrive here on Tuesday but got delayed as Islamabad wasn’t happy with the security arrangements in India. Finally after Home Minister Rajnath Singh’s assurance, the team arrived on Saturday evening.
Afridi said the delay did not hamper their preparations as they were already training in Lahore.
“We were practicing over there. We didn’t think about that (the delay). We were mentally and physically ready that definitely we will go.”
Asked if it will be a battle of Indian batting versus Pakistani bowling, Afridi said: “For the last seven years, this has been the case.”
The right-arm spinner added that Pakistan are confident of their bowling line-up and are looking forward to playing in the cricket extravaganza.
“Bowling attack is great — Amir, Mohammad Irfan and Mohammad Sami has comeback and Wahab Riaz. The fast bowling attack is really good. If our batsmen play according to plan and put up a good score, then we have a bowling unit who can defend it. I am very much confident of the bowlers.”
Afridi said he might move up the batting order and play with added responsibility as he was a senior member of the side.
“As captain I give youngsters a lot of chances. Same situation here. But in big events seniors (must soak) most of the pressure, be it me Mohammad Hafeez or Shoaib Malik. I may come out to bat in the top order,” he said.