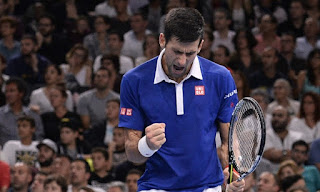 It was an easy win for Djokovic when Murray had some serious mistakes in final. Djokovic has his fourth title in Paris. He is the first player to win six ATP Masters series events in a year. He took just 90 minutes to claim the title. Djokovic looked dominant in whole match.
Murray did well than their last encounter in Shanghai but he failed to even have a good fight against the Serb.

Score of this final match is