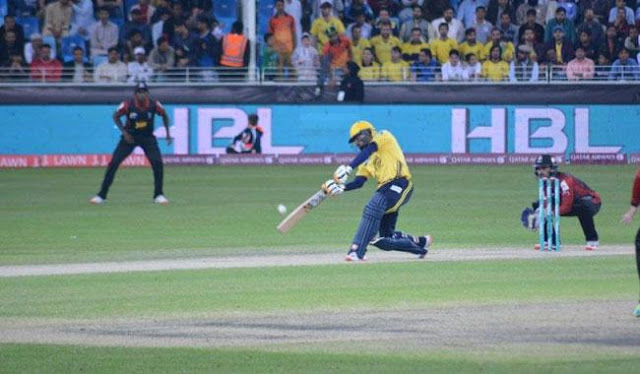 It was a great contest of two teams having their own strengths in specific areas.  Lahore have probably the best batting line-up in the Pakistan Super League having Chris Gayle, Umar Akmal, Azhar Ali and Dwayne Bravo in the side.
On other hand Peshawar Zalmi have a complete bowling attack in form of Shaun Tait, Junaid Khan, Wahab Riaz, Afridi and Mohammad Asghar.

Peshawar had the upper hand right from the first ball of the match when Junaid Khan bowled out Chris Gayle. After two deliveries Cameron Delport was run out for a duck with a direct hit from Shahid Yousuf at mid-on.
Azhar (31), Akmal (21) and Bravo (32) were top scorers from Lahore Qalandars and helped Lahore playing all 20 overs. Left-arm spinner Mohammad Asghar got 2 wickets for 11 with economy rate of 2.75. Shahid Afridi got no wicket but he only conceded 18 runs in his four overs.

The chase was never going to be a problem when required rate was less than run-a-ball. It was proved when Peshawar openers Tamim Iqbal (55) and Mohammad Hafeez (43) had made almost 80% of the target and made 95 runs in opening stand. Remaining 23 runs were made with ease.

Tamim Iqbal from Peshawar Zalmi was declared man  of the match for his brilliant innings of 55 runs not out.