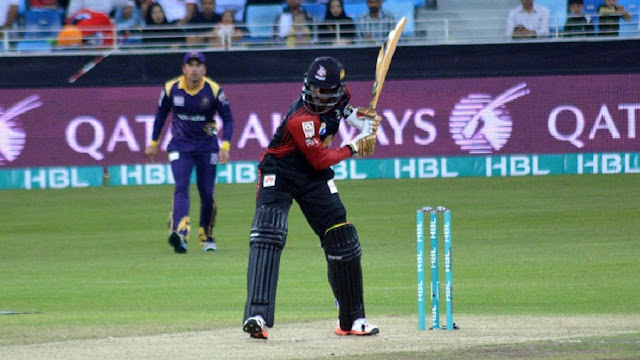 Over 400 runs were scored in Dubai, 58 boundaries were struck, and four batsmen raised fifties. In the end, Mohammad Nabi emerged the hero for his team, striking a last-ball four to guide Quetta Gladiators to a two-wicket win against Lahore Qalandars. After 39 overs of a high-scoring thriller that tilted one way and then another, the equation was simple – Quetta needed 15 off six balls; Lahore Qalandars needed two wickets or at the very least, some dot balls.
Lahore got that plan off to a fine start, with Nabi unable to put away Zohaib Khan’s yorker in the first ball of the over. Fifteen needed off five, with the game surely in Lahore’s hands. Nabi, though, remained unfazed and drilled a four and a six off the next two deliveries. Nabi and Zulfiqar Babar then exchanged singles over the fourth and fifth deliveries, bringing an enthralling contest down to the last ball. Zohaib bowled full and wide, and Nabi lapped up the gift, scything the ball over point and sealing a memorable win; a victory for Karachi Kings tomorrow could end Lahore’s campaign.
Even before Nabi’s 12-ball 30, there were other vital contributions with the bat that made Quetta’s daunting chase of 202 possible. Kevin Pietersen set things in motion, stroking the first five balls he faced, off Ehsan Adil, all for four. Pietersen’s blast gave Quetta much-needed impetus, as he and the opener Bismillah Khan put up 73 for the second wicket. Bismillah compiled 55 off 30 balls, but Quetta were dealt a double-blow when both he and Pietersen were dismissed off successive balls from Dwayne Bravo in the ninth over, tilting the game Lahore’s way.
However, the runs kept flowing, as Kumar Sangakkara (37) and Sarfraz Ahmed (21) pitched in with a handy 61-run partnership to keep Quetta in sight of the target. Ehsan Adil dealt the team quick blows on his way to picking up 4 for 39, but thankfully for Quetta, Nabi was on hand to script a stunning turnaround.
Earlier, Lahore’s 201 for 2 was built on the back of rapid half-centuries from their top three – Chris Gayle, Azhar Ali and Umar Akmal. They began with a 108-run opening stand between Gayle and Azhar; Gayle was unsurprisingly the quicker of the two, slamming a 34-ball 60 which featured six sixes. Azhar contributed with 61 off 45 balls, while Akmal provided the late thrust, drilling four fours and four sixes during an unbeaten 25-ball 55. Three of Quetta’s bowlers went at more than 11 runs an over, but Anwar Ali bore the brunt of the batsmen’s punishment, finishing with figures of 4-0-57-0.