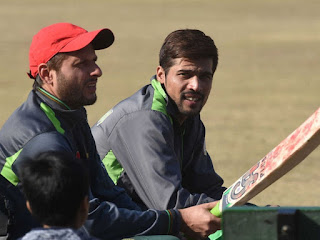 Pakistan T20I captain, Shahid Afridi gave his complete support to the decision of including tainted fast bowler Mohammad Amir for Pakistan’s limited-overs tour of New Zealand.
Amir was included in the squad by the selectors despite resistance from senior players like Mohammad Hafeez and Azhar Ali. The 23-year-old bowler will be making a return to the national side after serving his five-year ban.
Afridi took to social media platform, Twitter to express his happiness with Amir being given a second chance. In his tweets, Afridi believed that Amir telling the truth warranted the bowler being given another chance to establish himself as Pakistan’s bowling spearhead. The T20I captain also believed that everyone needs to move on and back the young bowler.
Afridi joins the few people who have been backing Amir, like Shoaib Malik and chief national selector Haroon Rashid. Amir’s performances have only made the job easier for the selectors to make way for his comeback into the national squad.