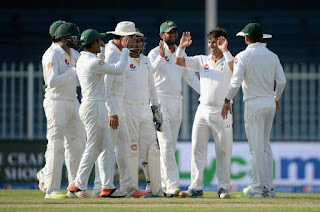 Third and final test match between Pakistan and England is now entered in a very interesting phase. It is a where both teams have equal chance to win this game.
Start of third day was very good for Pakistan when they got wickets in regular intervals. Shoib Malik, Yasir Shah and Rahat bowled well to restrict England in decent lead. Shoib Malik got four wickets,Yasir and Rahat also took some important wickets at crucial times. England made 306 runs in first innings and their lead was 72 runs.
Pakistan started well with the bat in second innings. Pakistan had a good opening stand of 101 runs to come out from the pressure of score they were behind in first innings. England’s bowlers generated reverse swing to get rid of Yonus and Malik.At the end of third day Hafeez is bating on 97 with night watchman Rahat who has not opened his account yet.
Pakistan is 146/3 at the end of third day. First session of fourth day will be important for both teams to win the match. England will try to get wickets and Pakistan will try to make runs without loss of anymore wickets.
May be we can get some clear picture of winner at the end of fourth day. See you all then.