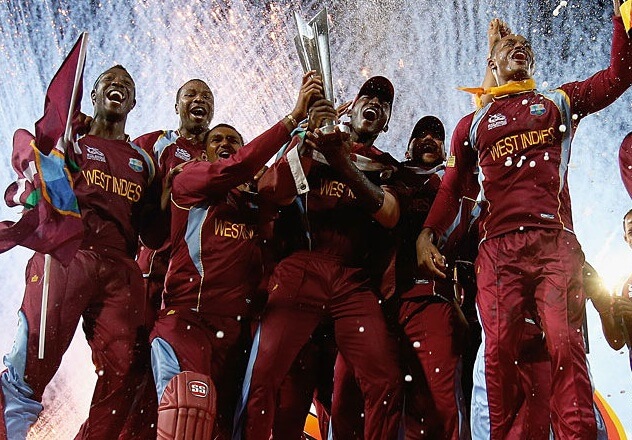 Those are the facts. The how is all the more extraordinary. Set 156 to beat England and win the championship, West Indies found themselves needing 19 off the last over, to be bowled by Ben Stokes. Marlon Samuels, who had steered the chase, was on 85. But he was at the wrong end. This was all down to Carlos Brathwaite, the allrounder who emerged on the Test tour of Australia just a few months ago.

Six. Six. Six. Six. Job done with two balls to spare. The first one was a poor ball from Stokes, down leg, clubbed over deep backward square. Then a length ball slammed down the ground over long-on. Then over long-off. One run needed. Push a single? Why bother when you have the power, like Brathwaite, to crunch another six over the leg side. The West Indies players streamed onto the field in jubilation. They had not only done it. They had done it in style.

And all this from a team that, in the weeks before this tournament, was stuck in another pay dispute with their board. But that is for another day. This day was about what happened on the field, and West Indies dominated the first over of the match and the last over of the match. England, along the way, had their own ups and downs, but by taking wickets throughout the chase gave themselves a strong chance of claiming their second World T20 title.

But if Brathwaite destroyed them at the end, Samuels was the one who chipped away at them through most of the innings. Samuels walked to the crease in the second over of the chase, when England had surprised West Indies by using Joe Root with the new ball, and he duly claimed Johnson Charles and Chris Gayle in his first over. Samuels had a mountain of work to do, and he did it, just as he had in 2012.

Samuels is an enigmatic cricketer, one who seems to spend long periods in hibernation. During those times he looks like a Don’t Care Bear. But when he awakes, he is capable of anything, as he showed during the World T20 final in 2012, when his 78 from 56 balls set up the West Indies victory over Sri Lanka. Here when he came out of his hibernation, he was a Kung Fu Panda, clubbing England’s bowlers and kicking them into the dust.

And he did it with limited support. England’s bowling was good. David Willey picked up 3 for 20, Liam Plunkett was hard to get away, Adil Rashid cost less than six an over. Dwayne Bravo managed 25 off 27 balls but besides him, Samuels and Brathwaite were the only ones to reach double figures. Brathwaite’s final score was 34 from 10 balls, not out. Notably, Root did not bowl an over after taking 2 for 9 in his first.

West Indies found themselves needing 45 off the last four overs, then 38 off the last three, and 27 off the last two. But Eoin Morgan had left himself with Stokes and Root as his only bowling options, and Stokes could not hit the mark. Chasing had again proved successful for West Indies, who did not lose a toss in this tournament and bowled first every time.

You could sense the relief for Darren Sammy, then, when he won the toss for the 10th successive time in T20 internationals, and sent England in. Ball one, Samuel Badree skidded it past the bat of Jason Roy, who was struck on the pad. Not out, sliding down leg. Ball two, Badree skidded it past the bat of Roy and onto the stumps. Roy had starred with 78 in England’s semi-final win over New Zealand, but this was going to be a rather different sort of innings.

When Alex Hales flicked Andre Russell to short fine leg in the next over, it felt like an anti-climax was brewing. So too when Morgan, perplexed by Badree’s wrong’un, edged to Gayle at slip to leave the total at 23 for 3 in the fifth over. But Badree bowled out, his figures of 2 for 16 impressive, and suddenly it was more of a contest.

Root was outstanding in the face of wickets falling around him. He struck seven boundaries and all were from classy, traditional cricket strokes, mostly along the ground, through the gaps. When eventually he innovated, he immolated. On 54 from 36, he fell when he tried to paddle Brathwaite over short fine leg, but in that position Sulieman Benn dived forward to take a sharp catch low to the ground.

West Indies’ fielding was universally outstanding. No catches were dropped, and some of those taken were far from straightforward. Badree, Brathwaite and Russell were all hard to get away. Bravo found three wickets, including those of Stokes and Moeen Ali in the space of three balls. But the fifth bowler – a combination of Benn and Sammy – leaked heavily.

Benn’s three overs cost 40 runs and Jos Buttler clubbed him for a pair of consecutive sixes in his 36 off 22 balls, and Sammy bowled just one over for 14. Sammy finds himself in the strange position of having captained West Indies to one of their greatest triumphs in recent years, but in doing so having almost done himself out of a job. He made only eight runs in this tournament and bowled three overs for 31 runs. In three games he neither batted nor bowled.

But frankly, who cares? Sammy is a dual World T20-winning captain. His men have done what no others in cricket have done. And they have given the Caribbean region a hat-trick of triumphs in 2016. What a year for West Indies.