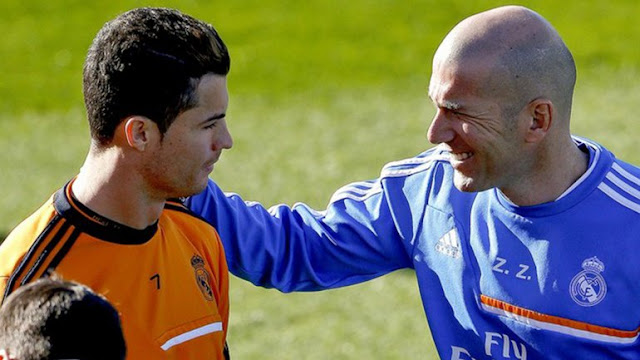 Cristiano Ronaldo is back to his supreme form again since Zidane has taken the command and now the French manager has admired his star man’s desire and ability to achieve his own goals. Zidane was speaking behore clash of of Real Madrid against Granda.

Zidane said “I feel a certain admiration for Cristiano, I admire him for his goals and for everything he has achieved. I like his ambition. He is never satisfied with what he has done, he always wants more.”

“He is a super important player for me, for the team and for the fans. “I retired at the age of 34, but Cristiano will play on longer. It’s not that I did not look after myself, but he takes a lot of care of his own body and is a beast physically.”

Ronaldo has previously expressed admiration for management style of Zidane and returning to his form is a good news for team,management and Ronalso’s fans around the world.

Real Madrid will not include their Welsh winger Gareth Bale in the match against Granada. Zidane said that they won’t in rush  to see the Welshman back into action.
“We have decided to take things easy for a bit,” Zidane said.”He is getting better, but he is not fully recovered yet.”
Bale is recovering from a minor calf injury and Zidane is hoping that he will soon have a fit and strong Bale along with Ronaldo to fight for the La Liga title.
Real Madrid is on third place in the La Liga table but Zidane has refused to give up in fighting for the title.

“The players all know we can still win the league,” he added.”We all know what the situation is like and that it will be difficult, but we will do everything we can.”
Zidane is enjoying the Real Madrid dressing room and Florentino Perez is hoping that Zidane will guide this team to get glory in domestic title and in Europe.

Irfan Admits He Was Approached By Bookies Which He Could not...